It was in the year 1891 when the slot machines history began. The first ever machine had been designed in the city of New York by Sittman and Pitt. It was a forerunner of the slot machines placed at online casinos of today, a list of which can be found at this site.The machine had five drums which displayed poker hands instead of the symbols that we see today. The first slot machine did not really have any type of payback mechanism and so the companies, which bought the machines decided the prizes to be paid on their own. Another turn in the history of slot machines had been when Charles Fey made the well known Liberty Bell. The Liberty Bell did not really get much success for a few years still now it is known as the machines which changed gambling history. 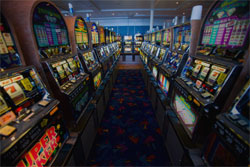 The slot machine, which was made by Charles Fey, looked quite different than the ones we see today. It had been totally cast iron, weighing 100 pounds, and the fruit symbols that we know and love today were not there in the machine. The machine, instead, had symbols like playing cards suits, horseshoes and stars. The payout had been 50% for the winners. The very first Liberty Bell, which had been designed by Fey, can still be found in the Liberty Bell Restaurant and saloon in Reno.

The next came the Operator Bell machines, which had the famous fruit symbols, and this machine has become the standard for all slot machines.

Another important figure in the history of slot machines was Bugsy Siegel. Bugsy had built the famous Flamingo Hilton Hotel on the Vegas strip, where he invested a good amount of money to fill up the casino with slot machines just to keep the female companions, wives and girlfriends of the rich and famous players occupied while the men were playing at the card tables.

In the early 60s the slot machines went electronic and almost all the casinos on the Las Vegas strip changed their machines and brought in the electric versions. These machines were more secure than the mechanical machines and it was harder for the players to cheat on these machines. Different types of slot machines appeared than and today any casinos now have dozens of different types of machines on their floors. Since that time many slots types were developed, for instance aces of faces video poker game.

Another turn in the history was in the 70s when the companies began to use random number generators and microchips in the slot machines in order to determine the results of the spin. Players no longer needed to pull the arm to make the reels spin. Over the years the slots kept advancing and by the 80s slot machines were already very popular in the casinos. These machines today alone account for almost 70-80% of all the profits of casinos.