How to Play Slot Machines 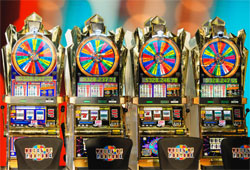 Today the most popular machines are the penny and nickel games and the dollar and quarter reel spinning games. However, there are several games in different denominations starting from 2 cents to $100. Almost all the slot machines have currency acceptors so players just have to slide in a bill in the slot and the appropriate number of credits would be displayed on the meter. For the reel spinning slots, the player just has to push the button which says "play one credit". Push the button until you reach the number of coins you wish to play with.

How to Play Video Slots

Most reel spinning machines have a single payline, which is placed across the middle of the display screen. Some of them might have 3 or 5 paylines. The symbols, which would be displayed on these paylines, would determine whether or not the player has won any money. The symbols, which are usually seen in slot machines are double bars, bars, cherries, sevens and triple bars. You can also read the books on slots to know more about slots symbols.

There would be a payout chart near the slot machine, which would tell what the payout is for every winning combination of symbols. For example a single cherry might pay 2 coins while a mixture of bars might pay 10 coins.

Video slots also additionally have scatter pays and bonus rounds. Scatter pay means that the specified symbols, when they appear on the screen, would be paid to the player even though the symbols might not be on the same payline. Also a special symbol when displayed gives a bonus event to the player. The bonus may be free spins or the player may even get a second screen bonus.

Whenever a player would hit the winning combination, the won amount would be added to his/her credit meter. The player can collect the coins on the meter by hitting the button which says Cash Out and there would be a ticket which would be printed out. This ticket can then be bought for cash. You can also take part in the slots tournaments using these tickets.