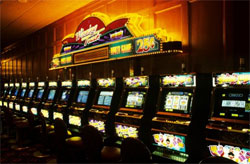 Not many players know that when they pull the simple handle of the real slot machine a series of interesting events take place. Understanding how slot machines work is a very fascinating thing especially for those who love the game. But except this we are to know the slots etiquette.

What Happens When the Handle is Pulled?

Given below is the complete sequence of events that occurs when the handle is pulled:

While all the above information might sound to be quite confusing and technical, what a player would see, when the lever is pulled is actually quite simple. When the handle is pulled there would be a clunk, after which the 3 (or more) reels would begin to spin. The reels would then stop spinning one at a time and then the payout would be shown, if it is a winning combination. The slot machines are always made in such a way that the reels would stop spinning one at a time since it builds up the excitement for the player.