Today slot machines are the most popular gambling game in casinos. And the slots rules are the easiest possible to imagine. Ever since they had been invented, they had been popular in the US. Slot machines had first been invented in New York and had instantly become popular among players who wanted something entertaining which did not require any complex strategies. The concept of a casino game which required no dealer and no skill for the player in order to win had fascinated the players then. The modern slot machines have come a long way and it is almost impossible for players to cheat against these machines. These machines offer a wide variety of gaming experience. Unlike the card games which are available in online casinos, slot machines do not require any dealer an can be played at any computer, as the system requirements are very low. 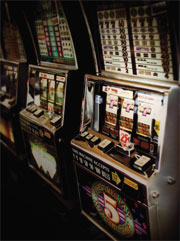 The player has to insert coin into the coin slot and then he are to either pull the lever or push the button. Once this is done the reels would start spinning and depending on where the reels stop spinning there would be symbols lined up on the screen. Depending on the combination of symbols and numbers and the amount of coins which were inserted in the machine, the player would either lose or win money.

The ooriginal slot machines worked on levers, toggles and gears. The main feature in these machines had been the metal shaft, which had supported the reels in the machine. The shaft was then connected to the lever or the arm, which made the reels spin. The breaking system would stop the reels spinning, and it this way those slot machines were protected from robbers. Still, there were players who invented rather sophisticated methods of cheating at slot machines.

In the electrical slot machines the reels are spun due to the work of special electronic mechanism. The general idea is the same, though the ways of their implementation are quite different. Every slot machine would have a payout table displayed which will let the players know the combinations, which would be paid and the other features of the machine.

In the older analog machines there usually is a handle on one side of the machine, which the player has to pull down in order to make the reels spin. Some of the digital machines still have the arm just to keep the feel there. Also the modern slot machines today use random number generator in order to determine the exact location where the reels will stop working. What concerns the online slots, it is all way easier.