When it comes to casinos, there is a set of rules and regulations, which have to be followed. Also, apart from the written rules there are also a few unspoken etiquette regulations, which all players should follow. While there have been several articles about the etiquette for the card games, not much has been said about the etiquettes which should be followed while playing slot machines. A slot machine is a solitary activity and in most cases there is no need for any interaction with the other players. However, there are a few basic etiquettes, which should be followed by players in order to make the experience enjoyable for themselves and also for others. 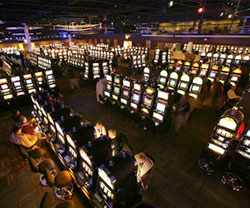 When you are playing slot machines, and you see a coin cup placed on the seat in front of the slot machine or on the handle it would mean that the machine is occupied and is used by another player. The player might have gone to the bathroom or to get some change. In those casinos, where the slot machine is coinless, there might be some personal item placed on the chair in order to reserve it. If you come across something like this you should just go ahead and find another machine.

Also if you are playing on a machine and you need to run to the bathroom you should try to get back as quickly as possible. You could also ask an attendant to stand by the machine while you go but if you do so always remember to tip the attendant.

There are quite a lot of players, who like to play multiple machines at one time. However, if you visit the casino at a time when it is very crowded you should refrain from using multiple machines since there are other players who are waiting for their turn on the machines. There also might be some casinos, which would have a sign saying that only one machine at a time should be used when crowded.

This could also happen if you have a companion who is not playing but is just sitting at the next machine when you are playing. This should also be avoided when the casino is crowded. Allowing other players to get a chance to play the slots is a basic etiquette as you would not like it either if you were in that position.

In many cases, when a player leaves the slot machine he/she might forget the card in the slot. When you would insert your card in the machine you will find another card already in the machine. The best thing to do in this case is to just place the card on top of the slot machine and wait for the player to come back to collect it. Sooner or later the player would realize that the card is missing and would come and collect it.

Following these basic etiquettes would ensure that you as well as the other players enjoy their time playing slots. It doesn't matter what type of slot it is, the same rules work for all of them.